The definition of ‘Long’ here can be different from one person’s opinion to another. But, in my opinion, one is considered staying in a country long, when it has already been more than 3 years that he or she has been staying in a foreign country, because ‘ADAPTATION’ phase has normally been reached when one has been living, say in Germany, for more than 3 years, in my opinion. I know once again, the definition of ‘LONG’ here are varied. So, I hope it’s not something to argue about.

In my opinion, the first two years are  HONEYMOON phase where everything new is seen as a bright romantic light, and NEGOTIATION phase where one feels shock of certain cultures due to different systems, language barrier, frustrations and anger because all the new things that once were seen as romantic, do not seem romantic anymore. Entering the third year, the phases become ADJUSTMENT AND ADAPTATION: One develops routines based on the host culture, and is accustomed to the new culture. He or she knows what to expect, what should be done or not to be done in certain situations. Finaly, he or she becomes the master of the new culture without forgetting his or her own traits from the earlier culture (biculural stage).

Here are some of the things  I get accustomed to and I notice most Germans do:

There are few people here disobey the Ampelmann, but most of the people here,even I myself, who is not a German, but have been here for nearly 5 years always obey the Grün ampelmann. The Germans do not jaywalk even if the streets are totally empty. When asked why not crossing the streets when they are empty, the answers are logical ‘The Ampelmann says so’, and’ What if all of a sudden, a super fast car passing by, and you got hit? who’s to blame? the driver? NOOO, you, you are to blame for disobeying the ampelmann, thus insurance will not cover your damage. 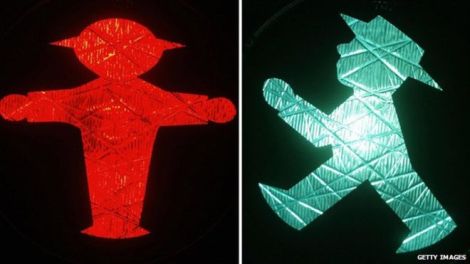 Discussing about garbage separation system may need one whole separate blog, because it is not as easy as you might think it is. In our household, we have 5 separate small containers for 5 different waste: plastic, paper, bio, cardboard boxes, other than these 4. Of course we need a separate container to trash batteries, but like I said, I will need one special blog only to discuss about garbage separation systems in Germany. When one is long enough in Germany, s(he) will get used to these containers, and be automatically go into the correct container to trash this. You will feel guilty if you are mixing them up. 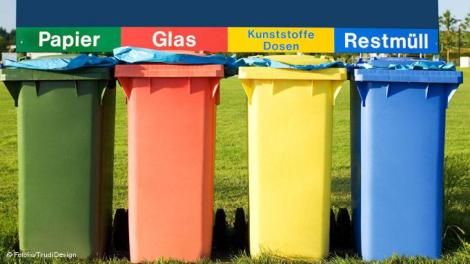 Unless you do not mind giving away your small coins for PLASTIC shopping bags sold by the supermarkets! You will feel uneasy when you know you notice your shopping bags are not in your bag.

MSC stands for Marine Stewardship Council, certified sustananle seafood. It’s a label that is sometimes stuck in seafood packaging.By paying close attention to the type of seafood you eat, you can help WWF to revive our ocean and sustain it for generations to come. 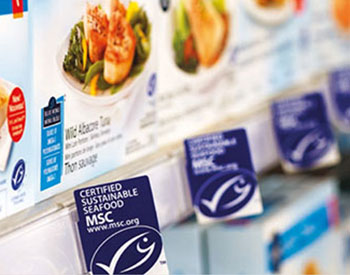 Image : The Marine Stewardship Council (MSC) has reached an important milestone with the launch of the 20,000th MSC labelled product.

We are not BIO freak! but for some products, we consider going BIO! Many Germans also pay attention to BIO products. It  goes without saying that the products are expensive, but when they are BIO then we can understand why the prices are high. In many kindergarten here, they often say that the food they cook for the kids are from BIO products.

This happens to me! Even when I am back to Indonesia to visit my Indonesian family, I mix my language with these words without my noticing it. These words have stuck in my brain replacing the English words that have the same meaning. Read here my blog about 6 Common Words

How does it feel not going shopping on SUNDAY? How about if you forget some important stuff that you need on MONDAY MORNING? Well, ‘selber schuld’ or blame yourself for forgetting buying it on SATURDAY or days before.Oh yes, Germans always plan ahead! although some are spontaneous. Sonntagsruhe is the most special time in Germany, SUNDAY with no hassle with any kind of shopping. The first weeks I stayed here, I was not used to it, and I found it strange! BUT, after a few weeks, let alone now that I have been here almost 5 years (next June will mark my 5th year living here), I find this concept GREAT! I can be waking up rather late than usual, I don’t have to think about groceries and other kind of shoppings, I can spend the whole time doing what I basically like with my family! OH yes, SUNDAY is definitely A FAMILY DAY, A LAZY DAY (even a mom has a privilege to be lazy!)

We rely on public transportations so much that we can’t simply ignore  these public transportation schedules. Even if it’s only for a simple case, like going from within a city. Everything is available online, however if you don’t rely on the internet to check this, you can always find the time table on the, say, bus stops you  have to go. The public transportations here are mostly on time. The buses, and trains come only in certain time, like every 30 minutes, every one hour, and only go not later than 11 PM, for example. So, of course, you don’t want to miss your every-one-hour bus then you have to wait in a cold winter  time for the next one hour to get to your bus.

Apfelsaftschorle, is a popular soft drink in Germany. It consists of carbonated mineral water and apple juice. Every restaurant here has this!

Although you are not a big fan of football, you know your surroundings are talking about the current match, and slowly begin to watch the matches by and by. In Germany, there are many local football clubs too, and these clubs compete each other in certain season. Before living here, I had no idea what Borrusia Dortmund (BVB)was, then on my 3rd year of living here,  I started to feel the euphoria whenever BVB wins. Well, some people hate football, but not with MOST GERMANS, they love this sport either doing it actively, or watching it passively, no wonder the German football team is one of the toughest football teams to beat.

Let them go out completely, then we can come in! Instead of rushing yourself in order to get a seat on the train, you will wait people getting out of the train patiently. Make some space for them to pass through!

Lunches in Germany are warm, but dinner is not necessarily warm: some sort of bread with slices of cold meat (Aufschnitt), or canned fish will do. We call this as Abendbrot. Abendbrot can be elaborative as well.

Even if you speak English well, your remember your other native language, what comes out of your mouth when you swear is ‘Scheiße’ (excuse my language)

Germany is known for its Chrismas markets. Thousands of people outside Germany are willing to travel to Germany during Christmas time to visit different kinds Christmas markets in many cities. Having lived in Germany for almost 5 years (Next June will mark my fifth year living in Germany.), and attended Chrismas market or we call it Weinachsmarkt already 6 times (the first on was when I did a month visit to Germany), I am always excited when it comes to winter time, December. Even though, Christmas Markets here are nothing new from time to time, but still attending to one or some of them once a year is something I am looking forward to. 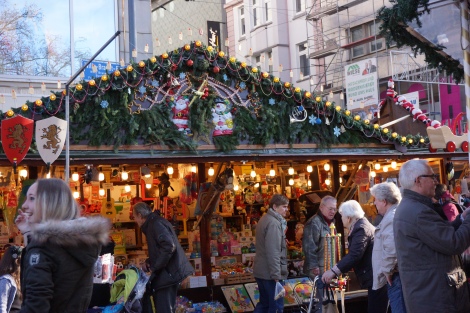 Tatort is a German police jargon meaning the scence of crime.The series are often interesting I think, even though I still find the hard time catching up what they are saying. If we decide to watch it, we usually watch it online a day or so before, and for that the subtitles help me understand the whole story better. 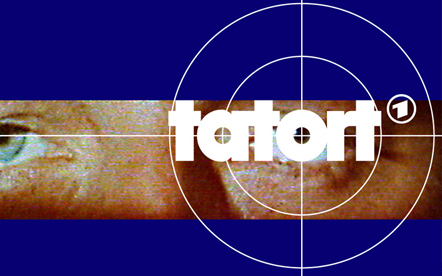 Even if you arrange some playdates with your close friends, you can’t simply come and knock the door or ring the bells saying ‘Hey! surprise!! here we are coming to see you!’THAT is not a good way to surprise the Germans. So make appointment beforehand!

There are too many insurances here, sometimes I am surprised that it seems every little thing or case is insured if you decide to take. I am having headaches sometimes that every person I meet here talk about different kind of insurances, and I end up asking rhetorically ‘ Oh, you have that kind of insurance?’

When I said ‘Used to insurance’ I only mean that you often think whether a certain thing is covered by the insurance or not. Understanding completely different kinds of insurance is something else.

Jack Wolfskin is a major German producer of outdoor wear and equipment headquartered in Idstein.  The jackets for example, look simple yet strong ( Germans love simplicity! I guess). I personally am not brand minded, so this one does not apply to me. I wrote here based on my observations here that many people here seem to love this brand. 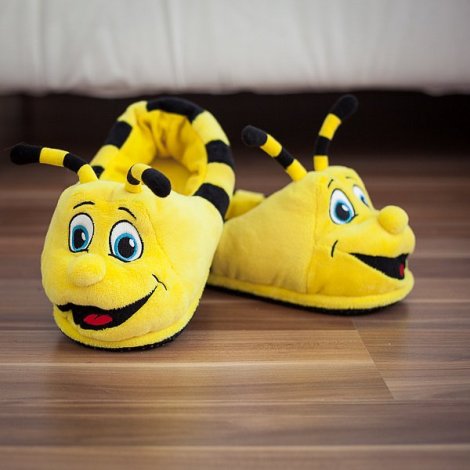 Slippers and Germans are inseparable. One even wears these during summer inside the house. You will never forget to bring slippers even if you stay in hotels, even if they are provided by the hotels, you know just in case! Slippers slippers at home!

Actually, this does not shock me that much. I am a very punctual person anyway. But for those who were not, then moved to Germany, I think you would change drastically, because Germans are mostly on time.

Dinner for One, also known as The 90th Birthday (German: Der 90. Geburtstag), is a two-hander comedy sketch written by British author Lauri Wylie for the theatre. German television station Norddeutscher Rundfunk (NDR) recorded a performance of the piece in 1963, in its original English language, with a short introduction in German. This comedy sketch went on to become the most frequently repeated TV programme ever.One of the TV shows you are waiting to see when New Year is around the corner, and is only shown on  New Year’S Eve.


There will be more other to follow, but I do not want to share all at a time! So, are you becoming  more German? If you ask me, I am still an Indoonesian, who adjusts and adapts, but not in a total conversion. I will adapt what I think appropriate to me, and will just enough to know what I think don’t suit to my personal belief.

3 responses to “You’ve been in Germany Long If..”