There is something special today, but told be truth, I find difficulties in starting my sentence with. Is this because I do not really think this is important? NO….. I think it is. Is this about feminism that I am writing about? I am not going to talk too deep. I am afraid I would be speaking out of the real topic.

My blog today is inspired by this Javanese Princess 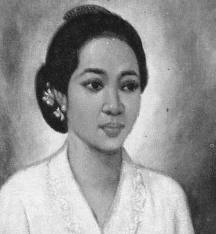 I really cannot compare woman’s today and woman’s then. But for sure, women’s today have more opportunities to show their existence than women in the past. Every time I watch movies about woman’s life in the past; how she needed to cope with rules that limited her real “power”as a human being, how she had to accept the fact that they needed not to do certain things because they were women, I assume woman’s then was more restricted to mobility.

It’s sometimes quite mysterious what makes the world see this differently. Perhaps it is because women in general are no stronger than men physically. Unless there is a proof, women who decide to work, say, in construction fields are often seen “weak”, but this only means women are creatures to be protected. So note: I did not use the word “underestimate”. That was why I used “weak” in quotations. ( FYI: Words in quotations are confusing sometimes, hehe)

I shall agree that in general women are no stronger than men physically. However, I salute those women who manage to work something masculine, like in a construction field.

Let me borrow a lecturer’s saying a long time ago : Collecting degrees. He joked about making the name more sophisticated with those degrees here and there. It was a pretty nice joke, though. However, whether a woman ends up taking care of the children, and devoting to her husband has nothing to do with getting further education. Education is education. Family is family. Even though I think there is  education in devoting to family : bringing up children, for example. There are lessons to learn, that is.

I salute those women who never stop wanting to study further for the sake of herself  (her life) and her family too. And I believe studying further does not necessarily mean studying at universities, and collecting degrees, hehe.

Above all equalities, which I believe more than just the two I have mentioned above, women are not supposed to forget their blessing being born as women. What I mean to say is that : each of us was born with somehow different responsibilities. I salute those career women who have good positions in their fields, however they need not to forget their children and family. A woman is a mother of her children, a wife of a husband. Have you ever heard a saying ” Behind a successful man, there is a great woman.”

Women are naturally allowed to be busy of course, but like it or not they bear more responsibilities than just being career women.I have seen many career women do not bother taking care of the children. However, I have also met those women who manage to divide their time perfectly well between career and family. Now that’s what I call as “Feminism”.

6 responses to “Letters of a Javanese Princess”